Winter wings over The Wilds... 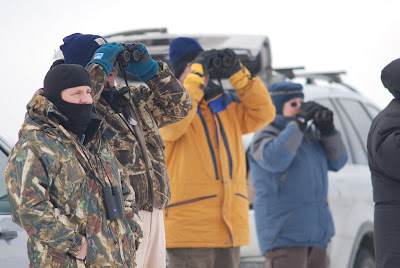 Bundled birders rendezvous with raptors at The Wilds. 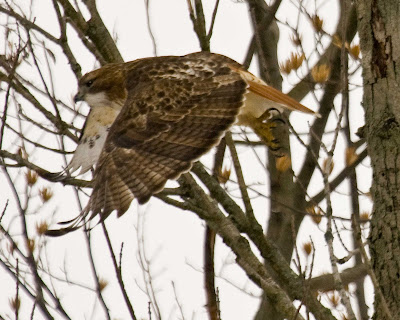 Red-tailed Hawk pushing through its first power stroke after leaving a perch at The Wilds.
Photo by Mike Maier, Photographer, Avian Expressions.
Record low temperature did not dissuade hardy birds or the hard-core birders determined to discover them at The Wilds. About one-hundred and fifteen birders gathered with all manner of winged-things wild and free for the Ohio Ornithological Society's (OOS) 4th annual winter raptor rendezvous at The Wilds, January 17.

Bulky-bundled birders exhaled swirling breath-clouds into piercing sub-zero air while gathering in The Wilds' visitor's center parking lot to organize eight field teams early in the morning (my vehicle thermometer dropped to 12 below zero Fahrenheit while passing through low hollows among surrounding hills). 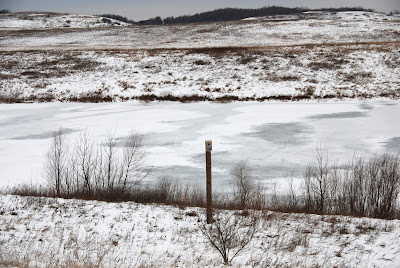 A nest box for American Kestrels erected through partnership between OOS, AEP, and The Wilds, overlooking one of the hundreds of frozen reclamation lakes, ponds, and wetlands dotting The Wilds and surrounding American Electric Power's tp://www.aep.com/environmental/recreation/recland/">ReCreation Lands.
Here, at The Wilds, over ten thousand acres of rolling grasslands and shrub-steppe habitat interrupt and diversify the steeply divided deciduous hillsides of eastern Ohio's Allegheny Plateau. Here, open-country birds of the northland find new winter habitat where forests once dominated.

Ninety-percent of the acreage at The Wilds has been surfaced mined for the bituminous coal that powered economic growth during the Baby-boomer heyday in the Midwest. Award-winning reclamation, and partnerships between AEP, The Wilds, and the Ohio Department of Natural Resources, inspired by a new era of reclamation legislation in Ohio, resurrected this wild area from a post-mining spoil wasteland to its youthful steppe ecosystem friendly for vertebrates, wild and semi-wild. Today, The Wilds is home to conservation science and research and home to some 29 species of rare mammals from around the world, some no longer found in the wild. The Wilds is a giant research zoo; and, The Wilds is a winter raptor magnet!

Some of the raptors and other birds my group enjoyed seeing:

This event was organized and staffed by generous volunteers with the Ohio Ornithological Society.
Posted by Bainnature at 9:38:00 AM No comments: 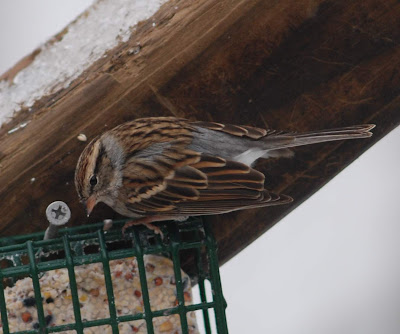 A Chipping Sparrow visiting a suet feeder in Delaware County, central Ohio. The wing toward the camera is drooping, suggesting the bird is injured. The injury may explain why this strongly migratory bird has remained in the north. The gray rump, strong eye-line and superciliary (eye-brow line), and two-toned bill are important fieldmarks. 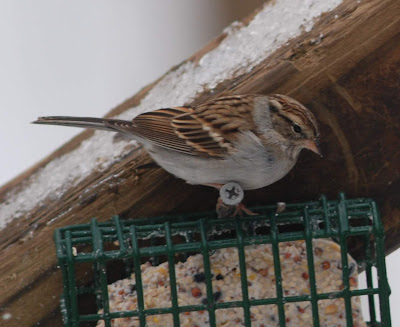 The 'clincher' fieldmark is found just in front of the eye: The 'lores', between eye and bill is dark, continuing the strong eye-line evident behind the eye. This one fieldmark separates the Chipping Sparrow in winter from other similar species. 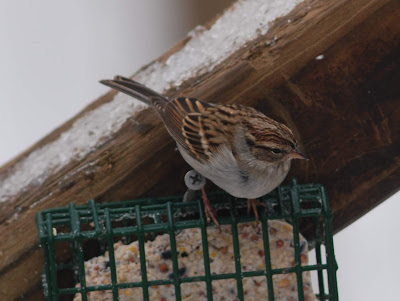 Note the wing-bars and streaked crown.

Summertime chippers are more boldly colored. The crown becomes rich chestnut bounded by long white superciliaries and black eye-lines, a striking pattern, to be sure. I look forward to their return every spring.

Chipping Sparrows are familiar springtime and summertime birds of lawn and garden, park lands and cemeteries, throughout Ohio. Their cheery trill announces their spring return with the emergence of showy wildflowers in April. Chippers are likely to nest in your yard and mine annually. With the advancing season their strong migratory impulse compels them to move well south of Ohio, most leaving by late October. Very few linger into December. January records are accidental to casual in Ohio. Warming climate and the proliferation of feeding stations are two possible reasons more and more Chipping Sparrows are reported each winter in Ohio and other northern states. 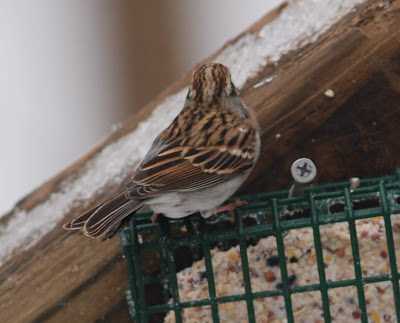 American history as presented to elementary students offers an heroic view of wilderness settlement. Our founding fathers and pioneer ancestors "carved" civilization from trackless "wastes" as they "conquered" wilderness North America; its flora and fauna and its native peoples were swept aside. They called it progress. We celebrate these "victories" still.

Conversion of North American ecosystems to support agriculture and development continues today, though our values and our challenges have changed. Today, we seek to preserve and recover remnants of the wilderness and the wildlife now mostly gone while attempting to sustain continued economic growth--the present economic "correction" notwithstanding. 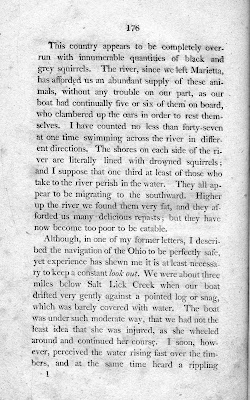 This account of a squirrel migration, by Christian Schultz, is typical of early accounts. He described countless squirrels swimming the Ohio River, or drowning in the attempt, while he floated down the Ohio River during 1807.

Synchronized masting over large areas ensured superabundant crops would overwhelm ravenous wildlife populations so future forests could seed from mast left behind. Abundant years were followed by years offering hardly any mast. These sometimes unpredictable and irregular masting cycles challenged squirrels, intractably bound to the earth and trees by gravity. Passenger Pigeons, on the other hand, enjoyed the freedom of flight. Massive pigeon flocks simply flew away from barren areas to discover abundant crops elsewhere. When pigeons found a heavy mast, they descended like a "plague of locusts" and devoured it in a "biological storm" of foraging.

This combination of cyclical synchronized masts and random "biological storms" occasionally left squirrels with empty cupboards, empty stomachs, and an itch to flee to abundance elsewhere: The great squirrel migrations followed. As settlement spread, squirrels were pressed further, and the inevitable intersection with human agriculture followed by crop depredations made these migrations "plagues" in the view of settlers.

Local pioneers gathered seasonally for spirited competitions to see which 'side' could kill the most squirrels, pigeons, deer, rattle snakes, or a mixed-bag. The objective of these 'side-hunts' often centered on a local scourge, frequently superabundant squirrels, and anything else passing in front of their gun sights.

Frontier hunts were important social gatherings where men exhibited their hunting prowess, and women and families sometimes gathered to barbecue the bag, put-up food, and consider future pairings. The results of frontier side-hunts occasionally made newsprint, if first-hand reports made their way to distant printers.

An 1801 'side-hunt' for squirrels, near Lexington, Kentucky, was reported in an early regional paper printed in Chillicothe, Ohio: 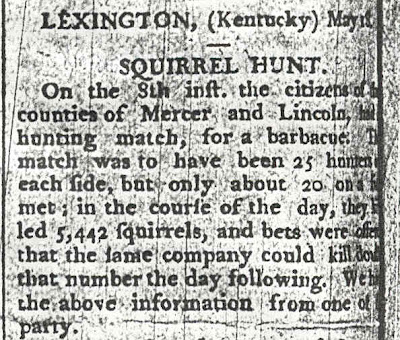 "On the 8th inft. the citizens of the

counties of Mercer and Lincoln, had

a hunting match, for a barbacue. The

match was to have been 25 hunters on

each fide, but only about 20 on a fide

met ; in the courfe of the day, they kil

led 5,442 fquirrels, and bets were offered

that the fame company could kill double

that number the day following. We have

the above information from one of the

"And this, our life, exempt from public haunt,
finds tongues in trees,
books in the running brooks,
sermons in stones,
and good in every thing..."

Find yourself in nature in 09.

Labels: Shakespeare
Newer Posts Older Posts Home
Subscribe to: Posts (Atom)
...We explore biodiversity with one eye on the skyline and the other on the stuff beneath our feet.